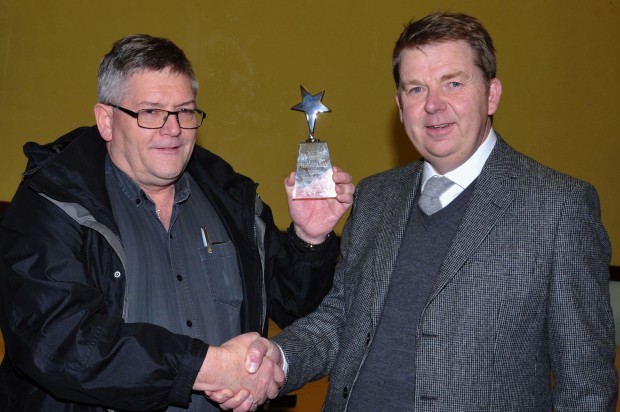 Nick Mack made a surprise presentation to Teesside Hero Tony Kirk to mark his tireless work in the Teesside community.

Nick, managing director of Macks Solicitors in Middlesbrough, Darlington and Redcar, made the presentation in his role as a patron of charitable movement Middlesbrough and Teesside Philanthropic Foundation.

Tony dedicated his Teesside Hero award to the late Brian McGowran, the next-door neighbour who inspired him to take up voluntary work.

He admits he did little in the community until attending Brian’s funeral in 2009, when he was inspired to take up the mantle after hearing about his friend’s extraordinary work.

“I had known Brian for many years as a great neighbour but not once had he told me about all the time he dedicated to volunteering to help others.

“For many years he had been an integral part of taking up to 2,000 pilgrims on annual trips to Lourdes in France and was renowned for his incredible work. I was totally taken aback and thought ‘Why don’t I do more?’”

Tony now dedicates long hours to helping to organise an annual pilgrimage to Lourdes for hundreds of Catholics in the Middlesbrough Diocese as head brancardier.

He also volunteers at the Middlesbrough Catholic Fellowship for those with physical and learning difficulties and organises an annual Christmas dinner for people across the town.

Along with a trophy, winners receive £1,000 for a Teesside good cause of their choice, with Tony choosing to share the cash between the Lourdes Pilgrimage and the Catholic Fellowship.

He said: “I’m stunned and humbled to receive a Teesside Hero award because it could have gone to any one of those volunteers who give up so much of their time to help others.”

Brian McGowran, who ran The Knights Club on Southfield Road, also played a role in the history of Macks Solicitors in Middlesbrough. He introduced Nick Mack to Anthony McCarthy and recommended him for a job with the firm.

Anthony is now a director of the firm and one of the leading personal injury solicitors and asbestos lawyers in Teesside.

To nominate an unsung community champion for a Teesside Hero award, visit the Get Involved section on the Foundation’s website, www.teessidehcharity.org.uk