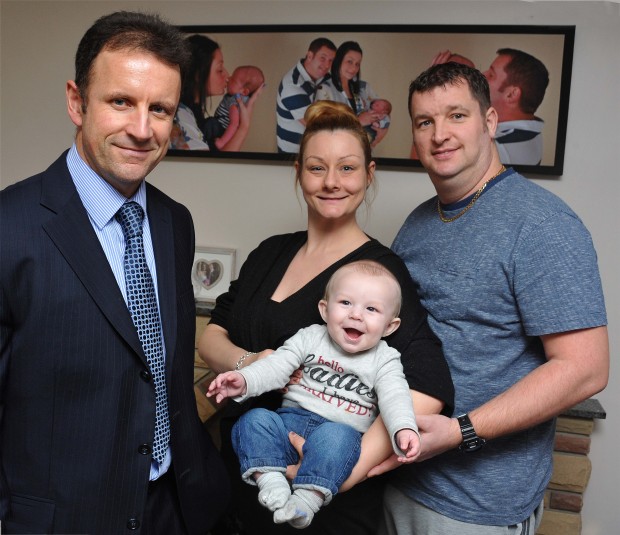 When a horrific car smash left him in a coma and with life-threatening brain injuries, Stewart Fryett needed good people around him who he could rely on

Doctors warned that even if he survived he might not remember Chrissy, his girlfriend of just six months, or their relationship.

But Chrissy stood by him in his hour of need and was with him every step of the way as he gradually recovered consciousness and battled to rebuild his shattered life. Now, five years on, they are married with a beautiful baby boy, Oliver.

And as well as having the skill and care of the doctors and nurses at James Cook Hospital in Middlesbrough to thank, the couple will always be grateful to another man who Stewart relied on heavily in his hour of need, Frank O’Connor, from Macks Solicitors in Middlesbrough.

The accident left Stewart in a wheelchair, living in a totally unsuitable one-bedroomed basement flat and unable to return to his well-paid job as a foreman at the docks.

With insurers stubbornly refusing to pay out, Frank, a specialist serious injury lawyer, worked tirelessly to piece together what had happened, gathering evidence from witnesses and interviewing experts.

“Frank was brilliant,” says Chrissy. “Any other solicitor would probably have given up on us and we would have been dropped. Frank kept believing in us and was just so hardworking.

“With Stewart having a brain injury, he would sometimes call Macks two or three times a day and ask the same question. But Frank was always very polite and is just a genuinely caring person. We couldn’t have asked for anyone better to look after Stewart’s case.

“There was no guarantee he would even be paid if we hadn’t won, but Frank refused to give up.”

Chrissy and Stewart met back in March 2009 and quickly became inseparable. But soon their lives would change forever.

“Stewart and I had been at a family barbeque at my mum’s house. Stewart got chatting to my stepdad and a family friend, Ian. I’d gone upstairs and when I came back down, the three of them had gone out in Ian’s car.

“Just as I was asking Mum where they’d gone, she received a phone call. Ian had crashed the car and Stewart was trapped inside.

“The doctors gave us very little hope. Stewart was unconscious and remained in a coma for 10 days.

“Things kept changing day by day – minute by minute, even. One moment we were being told to say our goodbyes to Stewart, and the next he showed signs of responding.”

After three months in hospital, Stewart was discharged, but life was incredibly difficult for the couple, with the legal wrangle raging on in the background.

They married in 2012 and the following year Frank’s persistence paid off when the driver’s insurers were unable to continue resisting the wealth of evidence he had amassed and finally admitted liability.

Frank then negotiated hard to get the best possible settlement for his client, ensuring all the medical implications of Stewart’s injuries were properly assessed.

As well as a substantial lump sum that enabled the family to buy a large detached home in Stockton, he was able to agree periodical payments so Stewart will receive the care he needs throughout his life.

Frank and Macks Solicitors managing director Nick Mack both have vast experience of dealing with all kinds of personal injury cases, big and small, and have handled a number of hugely complex multi-million pound claims for clients from Teesside, County Durham, North Yorkshire and nationwide.

Although most of the serious injury claims Frank takes on are as a result of road and work accidents, he has also works as a medical negligence solicitor, including severe birth injury claims.

“Stewart’s case was a good result and the pleasing thing is that he’s making fantastic progress. He’s defied the medical experts and is doing far better than they anticipated. He’s always said he’d turn the clock back if he could and doesn’t want any money, but unfortunately that can’t be done.

“However, the settlement enables them to get back to some degree of normality and provides treatment, equipment, transport, housing and care.

“They still regularly call into the office with the baby, everyone knows them because they were such a big part of our work. It’s nice to see that continuity and to know that everything we got for them, they genuinely need.”

Chrissy added: “The money means we don’t have to worry about how we’re going to pay for Stewart’s care and things like physiotherapy.

“We were so impressed with Macks Solicitors that we’ve retained their services for deputyship and I’m delighted they’re still involved with our family.

“They still keep in touch with us and sent us a lovely present when Oliver was born. Stewart still rings Frank up now – although not quite as often as he used to!

“We’d certainly recommend Macks wholeheartedly to anyone. They were outstanding.”