There was a time when divorce lawyers routinely settled cases in court, often at the end of bitter, Kramer vs Kramer-style legal battles.

However, more and more couples are benefiting from alternative ways of resolving their differences that avoid the trauma of appearing before a judge.

Elizabeth Gallagher, head of the family law lawyers’ team at Macks Solicitors in Darlington, is a passionate pioneer of one such method, the collaborative process.

“In the old days, people saw family law more like litigation, going into battle and fighting the other party to get as much as you can out of it,” says Elizabeth.

“But resolving family disputes doesn’t really fit well with that as you are dealing with people and their problems. “If you go to court it’s a bit of a lottery – the judge has wide discretion over how to interpret the law, and has no idea about what is important to that particular family and what the judge orders therefore may not be acceptable to either party.”

Collaborative law began in the United States in 1991 but has only been practiced in Britain for the last decade.

“Having undertaken family work for over 25 years, I’ve witnessed the detrimental impact of more traditional approaches on both parties and any children, which is why I consider the collaborative process to be a much better alternative,” says Elizabeth.

“If you ask the person in the street a lot won’t have heard about it, so we’re trying to raise its profile.

“The fundamental difference is you agree at the beginning that you’re not going to go to court to resolve your differences, and that’s the glue that holds everyone together.”

The process involves a series of four-way meetings in which the two parties and their divorce lawyers try to resolve all outstanding issues face to face. Both parties have their divorce solicitors at their side throughout.

”Without the threat of going to court, it’s much more open and you work as a team,” says Elizabeth. “It’s a far more holistic approach.”

The parties control when and where the meetings are held, and how frequently they take place. If one party is having a bad day, the meeting can be postponed to another date.

“We do it in the shadow of the law because we still want the courts to approve any agreement we reach, but we can be much more creative. You can ask a direct question and get an immediate response and if someone doesn’t understand, you can talk about it.

“In the more traditional approach, I would write to the other person’s solicitor, they would take instructions and then a letter would come back to me. Things can get misinterpreted and it becomes like Chinese whispers.

“This is more of a quality service. By talking through the issues and keeping control, each party can get to a situation where they can move forward more easily and get on with their lives.

“The process won’t work if you don’t trust each other, and that applies to the divorce lawyers as well as to the parties.

“This is cards-on-the-table approach from the start, with no hidden agendas. If the discussions do break down and one party wants to go to court, both have to walk away from the process, get new  divorce lawyers and start again.”

Elizabeth  says one reason for the high success rate of at least 85% with the collaborative process is the screening that takes place before it begins. “The divorce lawyers meet first to decide what the hotspots are, what issues the parties will fall out about and whether they think the parties are really committed and have the right mentality,” says Elizabeth.

“The court is not the best forum to deal with most family issues and the collaborative process can be used to resolve all issues that arise when a relationship breaks down. . When children are involved we always say that your relationship might be coming to an end but you’re always going to be the parent of those children. “Hopefully you’ll want to have some kind of relationship with your former partner so that you can both attend significant events in your children’s lives in the future.

“It sounds a bit idealistic and it doesn’t work in every situation. If there’s a lot of bitterness or one party wants to hide assets, for example, sometimes you may have to go to court to try to resolve things.”

Even in cases that may initially seem unsuitable, Elizabeth believes with the right guidance from collaborative family law lawyers and other professionals that can assist within the process, this process is likely to be a much better alternative for many couples when their relationship breaks down.

There are around 50 collaborative family law lawyers in the whole of the North East.

Collaborative family law solicitors are organised in PODs, which meet on a regular basis to get to know each other and discuss practice issues. Other forms of dispute resolution that also seek to keep divorces out of court include mediation, where a trained mediator who can’t give legal advice will try to help the parties reach their own agreement, and arbitration, where a qualified arbitrator gives a binding ruling. 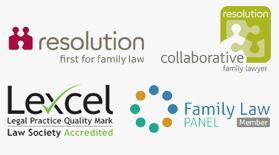